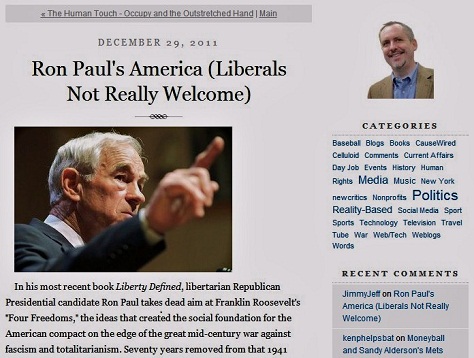 I disagree with ultra-conservative presidential candidate Ron Paul on most issues, and I can not imagine myself ever voting for him (I’m a lock for Obama in 2012 anyway). Still, I recently found myself vigorously defending this controversial Texas politician to my journalist and fellow liberal friend Tom Watson. Tom has been a severe and constant critic of Ron Paul, and has called him the worst of the Republican presidential candidates.

I know that Paul has many flaws, but I think he’s clearly the best of the Republican presidential candidates, because he’s the only one who does not advocate a ridiculous “get tough” policy on Iran. This “get tough on Iran” idea is rooted in the same guerrophilia and bigotry as George W. Bush’s previous “get tough on Saddam Hussein” idea, and I really can’t understand how Ron Paul can be the only Republican candidate to understand the similarity. He is also the only Republican candidate willing to propose strong cuts in military spending and military activities around the world. The Republican candidates for 2012 are a raggedy bunch, but Ron Paul seems at least to be more clued-in than the others on military and foreign policy.

After reading a steady stream of anti-Ron Paul tweets by Tom Watson, I asked Tom why he puts so much effort into criticizing the one Republican candidate who has an antiwar platform, and who stands very little chance of getting elected, when other Republicans who have stated an inclination to invade Iran if they get elected are actually considered serious contenders. I also asked Tom why he doesn’t feel any optimism about the fact that Ron Paul is introducing an antiwar message to many conservative voters who have long ago shut their ears to antiwar messages from liberals or from the mass media.

A long discussion followed, and it turned out that Tom Watson and I have very different ideas about what Ron Paul represents in this country. My admittedly idealistic belief is that Paul’s popularity represents the beginnings of a long-awaited and much-needed awakening. American conservatives are finally realizing that antiwar activism is not only for liberals, but that reduced military spending makes sense from every point of view. War, after all, is the biggest kind of big government, the worst enabler for tyrants, the biggest creator of government waste.

Tom Watson sees it differently. He is appalled by Paul’s disregard for our social fabric, for the legacy of community spirit that has helped to make this country great. Tom presented his final argument on his blog, titled “Ron Paul’s America (Liberals Not Really Welcome)“.

Many of Watson’s words are eloquent enough, and I agree with him that Paul has many flaws (which is why I’ve never considered him a serious presidential candidate).  However, the one fatal flaw that lies within Tom Watson’s argument must also be pointed out.

Watson speaks of Ron Paul’s pacifism with frankly insidious imagery, suggesting that antiwar liberals (like me) are being suckered in:

Yet this is just the candy that a predator uses to lure his unsuspecting victim into the back seat of his car. If the left joins this right, our future is a wasteland.

But nowhere in Tom Watson’s appraisal does he show that he takes pacifism seriously, or that he sees any momentum towards worldwide adoption of an antiwar agenda. In fact, the peace platform is a platform that never rests, and there is always momentum in the world towards pacifism. The popularity of Ron Paul is one indication of the dynamic nature of antiwar politics, and the great Occupy movement that began on Wall Street (which is solidly and blessedly antiwar) is another indication.

Doesn’t Tom Watson hear the chimes of peace? Instead, his article seems rooted in nostalgic “good war” imagery, with enough World War II references for a Tom Hanks/Steven Spielberg movie. Watson mentions “the great mid-century war against fascism and totalitarianism” … “11 months before Pearl Harbor with the certain knowledge of the national peril ahead” … “a man restocking the arsenal of democracy in order to fight and win a global war over both Atlantic and Pacific hegemony”. But these allusions to World War II are stale and inappropriate. Many recent history books like Human Smoke: The Beginnings of World War II, the End of Civilization

by George Feifer have pointed out the many ways that our understanding of the motivations behind World War II has hardened into cliche, and led us to believe too easily that World War II was a “good war”. This causes us to forget the larger truth that there is no such thing as a good war.

I’ve observed in these pages before that pacifism is a lonely position. It’s lonely in the Democratic party and it’s lonely in the Republican party. Ron Paul has helped to make pacifists a little less lonely in 2011, and that’s why I’d rather praise him than bemoan his flaws. Next, maybe we can forget about Ron Paul and find a new Republican or Democratic or no-party presidential candidate with an antiwar platform … who isn’t unelectable for one reason or another. Then maybe we can finally get some changes made.