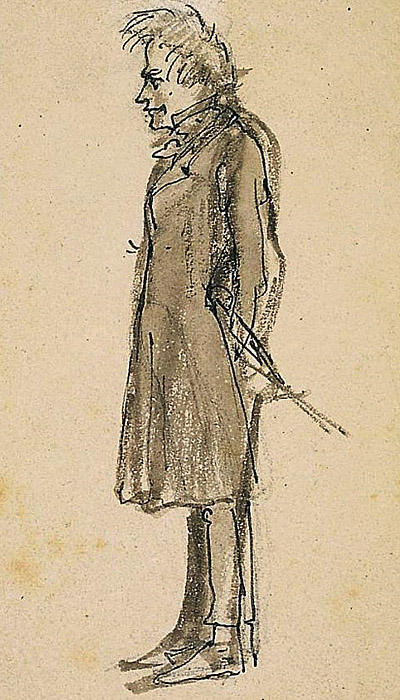 What do you buy a morose Danish philosopher who invented Existentialism for his 200th birthday?

It doesn’t really matter anymore, since Soren Aabye Kierkegaard is dead. He died at the young age of 42, already at this time a mostly broken man, an obsessive writer, a lonely bachelor, and a frequent subject of popular ridicule. Like Henry David Thoreau, Herman Melville, Franz Kafka and F. Scott Fitzgerald (with all of whom he shares some sensibility), he died at a low point of literary success, without much reason to expect that later generations would rediscover his work and call him a genius.

But I believe Soren Kierkegaard died a happy man, because he was that rare philosopher who found answers to the hardest questions he asked, answers that satisfied him completely. The questions were of religion, and of how to live a good life, and his answer involved the “leap of faith” or “leap to faith” (a phrase he invented). Kierkegaard was a devoted Christian, but he defied the philosophical norms of his age by expressly refusing to try to justify his belief with reason or logic. The power of religious faith, he pronounced, was in believing without reason or logic.

This was as much a “eureka” moment for Western philosophy as Rene Descartes’s cogito ergo sum two centuries before. Though Kierkegaard had to struggle to explain his ideas to his bewildered Danish and European intellectual peers during his life, his idea of religion as a leap to faith would spring incredible gardens of original modernist thought: inheritors of Kierkegaard include Fyodor Dostoevsky, Friedrich Nietzsche, William James, Paul Tillich, Ludwig Wittgenstein, Jean-Paul Sartre and many more.

Kierkegaard’s books can be tricky to get into. As a college student, I heard glowing summaries of Kierkegaard’s ideas from many of my Philosophy professors, but I was rarely assigned to read his original texts. Maybe that’s because he was a non-academic with a tendency to create sock puppets. Few of Kierkegaard’s works were written under his own name, as he preferred to hide behind pseudonyms like Anti-Climacus, Constantin Constantius, Frater Taciturnus, Hilarius Bogbinder, Johannes Climacus, Johannes de Silentio, Nicolaus Notabene, Victor Eremita and Vigilius Haufniensis. These “authors” often argued with each other, putting forth questionable ideas like characters in a Platonic dialogue.

Kierkegaard’s breakthrough work, Either-Or, is a paired set of miscellaneous documents by two authors, allegedly found in a desk, that present virulently opposite opinions on the nature of romantic love and the meaning of marriage. Kierkegaard’s own (obviously conflicted) stance on the question is nowhere in the text. Kierkegaard’s authorial identity games make him a proto-postmodernist, but they also make him difficult to comprehend.

It’s easy to get lost in the thick irony and reflective misdirection of Kierkegaard’s kaleidoscopic texts. Still, his books do break into sudden clarity often. Here’s one of several passages in which he explains the original idea of the “leap to faith”, from his late-period Philosophical Fragments

And how does the God’s existence emerge from the proof? Does it follow straightway, without any breach of continuity? Or have we not here an analogy to the behavior of the little Cartesian dolls? As soon as I let go of the doll it stands on its head. As soon as I let it go — I must therefore let it go. So also with the proof. As long as I keep my hold on the proof, i.e., continue to demonstrate, the existence does not come out, if for no other reason than that I am engaged in proving it; but when I let the proof go, the existence is there. But this act of letting go is surely also something; it is indeed a contribution of mine. Must not this also be taken into the account, this little moment, brief as it may be — it need not be long, for it is a leap.

Kierkegaard’s bicentennial birthday (May 5) is being celebrated around the world, and especially in his own country. The wonderful sketch of Soren Kierkegaard at the top of this page is a likeness “from memory” by the philosopher’s friend Wilhelm Mastrand.