Kerouac Goes To Cannes, and Other Beat News 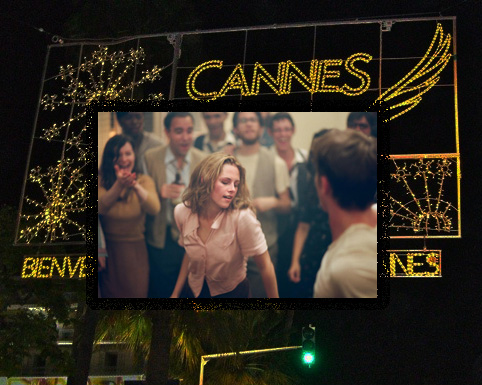 1. After (seriously) 17 years of development, the major new Hollywood Walter Salles/Francis Ford Coppola film of On The Road is going to premiere on May 23, four months and twelve days from now, at the Cannes Film Festival in the French Riviera. I can’t believe the day is actually going to come.

I’m not sure what to expect from this film, but there’s no doubt that Jack Kerouac, a Breton Francophile, would have been pleased about a prestigious Cannes festival premiere. Very little is currently known about the film of On The Road, and only a single still image has been seen: the photo above, showing Kristen Stewart and Garrett Hedlund as Marylou and Dean Moriarty apparently in one of the movie’s big dance numbers. The image may give some idea of the director’s photographic style (muted colors, naturalistic setting, not bad so far), but there’s no word yet on what the entire film is like. I’m looking forward to seeing a preview trailer soon. Thanks to the Beat Museum in San Francisco (always the first place to check for news about this film) for the scoop about the opening at Cannes. (For the record, the news is still unconfirmed, but it’s true.)

2. The two main characters in On The Road are Dean Moriarty and Sal Paradise, but since Kristen Stewart is the biggest star in the film, the character of Marylou will probably receive special emphasis. Marylou was based on Neal Cassady’s real-life wife Luanne Henderson, and those interested in learning more about this little-known figure from Beat Generation history will enjoy One and Only: The Untold Story of On the Road

, a new book by Gerald Nicosia and Anne Marie Santos that tells the story of On The Road (and all that followed) from a new point of view. As the youngest and least commanding member of the real-life Kerouac/Cassady traveling entourage fictionalized in On The Road, Luanne has often been imagined or depicted by literary biographers as a hapless unfortunate, caught in the Beat Generation whirlwind and then left behind after they became famous. One and Only presents Luanne as more knowing and more in control of her situation than Kerouac’s novel depicts, and also shows her to be a remarkable, intuitive, sensitive and courageous woman.

3. Here’s another worthwhile sideways look at the Beat Generation: Allen Ginsberg’s friend Gordon Ball has written the entire story of the Cherry Valley quasi-commune in upstate New York that became the rural getaway for New York City poets needing sunshine, cows and distance from their heroin supplies, and remained in happy operation for over three decades. I’ve been to Cherry Valley, a charming and poet-friendly small town, and I’m glad the story of this bucolic Beat refuge has now been told in full: East Hill Farm: Seasons with Allen Ginsberg

5. Gil Scott-Heron has written a memoir (lot of that going around, and I’m glad it is!). The book, which has just been posthumously published, is called The Last Holiday