[Editor’s Note: Lila Lizabeth Weisberger is a psychologist, a leading member of the National Institute for Poetry Therapy and the co-author of The Healing Fountain: Poetry Therapy for Life’s Journey. She’s also my mother. — Levi Asher] 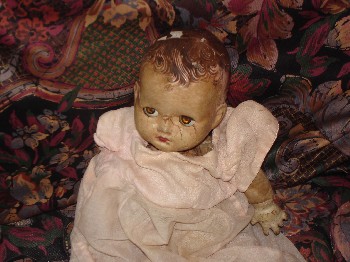 I am interested in healing stories, and have been creating my own stories as well as studying the techniques used by others. I was reading a book by Paul Auster, The Brooklyn Follies, because I have liked Auster’s writing in the past. I was also drawn by the book’s title since I grew up in Brooklyn, New York. I was surprised when Tom, the novel’s protagonist, spoke on page 153 about a healing story that Franz Kafka had written for a small child he’d met in the park who was crying about her lost doll.

An excerpt from the book:

Every afternoon, Kafka goes out for a walk in the park. More often than not, Dora goes with him. One day they run into a little girl in tears, sobbing her heart out. Kafka asks her what’s wrong, and she tells him that she’s lost her doll. He immediately starts inventing a story to explain what happened. “Your doll has gone off on a trip,” he says. “How do you know that?” the girl asks. “Because she’s written me a letter,” Kafka says … ” I’ll bring it with me tomorrow.” Kafka goes straight home to write the letter. He sits down at his desk, and as Dora watches him write, she notices the same seriousness and tension he displays when composing his own work. He isn’t about to cheat the little girl. This is a real literary labor and persuasive lie, it will supplant the girl’s loss with a different reality — a false one, maybe, but something true and believable according to the laws of fiction.

The protagonist, Tom, says that his heart began to break when he realized that Kafka returned to the park each day, with a new letter that he had written for the little girl and explained it was written by the doll. Kafka works out the plot of the letters so that the little girl, Nancy, understands why the doll has had to leave and as a result her pain is eased. Each day he returns to the park and gives her a letter that he explains was sent to him by the little girl’s doll, Suzie.

As I read on, I wondered if the tale about the journey of the lost doll was actually written by Kafka and was historically correct. I asked people who I knew were steeped in the knowledge of literature to no avail. And then I went to the search engine: google. I did not expect to be successful in finding references to Kafka as the writer of the stories to the dolls. After trying only two words, “Kafka” and “Doll”, to my surprise, I found many references to this story, and only minor differences in the details. I was excited at my find! I was joyful to be on the trail, along with experts from Germany and other countries. I was surprised by the interest so many people had in the tale, and the efforts being made over the years to find the manuscript or someone with first or second hand knowledge of its existence. There were a number of searches to find the letters, and to locate the family of this little girl who would be over 90 in 1996. The general conclusion was that Kafka did write these missing letters and had a empathetic side so different from how what readers of his darker works, such as The Metamorphosis, would expect, Unfortunately, the general conclusion of the experts is that these letters were most likely destroyed as other manuscripts of Kafka’s had been.

I wonder if author Paul Auster found the references to the story of the lost doll and the letters, in the same way I did, through the Internet. Some of the references were written before his book was published, and some afterwards

In a blog of book reviews, I found one of Paul Auster’s book The Brooklyn Follies. The reviewer said this book was not a must read, but that there was a highlight and that was the passage about Kafka. I think after all, that’s what I remember most about the book. Eventually I may forget where I originally saw the story about Kafka and the lost doll, but I will not forget the healing quality of the tale nor the remarkable joy I felt when reading it.

The final treat in my search was finding that a long poem, or short story was written by a poet named Dean Blehert entitled “The Dolls Journey”. In this work Suzie is the dolls name and Nancy is the name of the little girl. With her mother’s help, Nancy is responding to the latest letter she received from Suzie. Blehert writes that the idea for this illustrated work came from a footnote in a biography of Franz Kafka.

A passage to savor from this poem/book by Dean Blehert:

Now Mother sits
At the kitchen table, Nancy on a chair
Beside her. “Say I miss her, but it’s good
She gets to travel … Oh! And try to see
The King in London and that I will never
Get another doll, so please come home
Sometime and that …”

Each day another letter, a new place,
All secret she won’t even tell her friend,
Although at times she’s bursting just to tell,
As when, across the sandbox, she describes
The palace you can row with oars in Venice,
And Pat says, “How do YOU know?”

“Well…my Mom
Told me! Someday I’ll go and see myself.”
It would be fun to tell, but it is even
More fun not to. She almost hopes her dollie
Never does come back, but keeps on sending
Letters from everywhere.”

The scene came to life before my eyes and I felt that I was both an explorer and a detective. Now, I am more and more motivated to work with healing stories. I googled “healing stories” and of course found pages and pages devoted to this topic. Perhaps you will also be motivated to research healing stories and to find out more about Kafka’s letters to Nancy. I’d look forward to hearing anything anyone else knows about this tale. 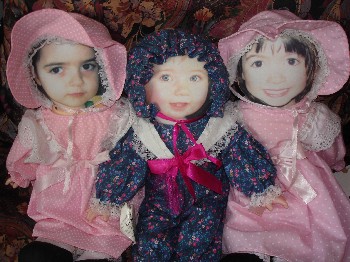 (Note: the first photo above shows Lila’s favorite childhood doll, which she still has. The second photo shows three dolls she created with the faces of her three youngest granddaughters. “Looking for Franz Kafka’s Doll” was previously published in Museletter, the official publication of the National Association of Poetry Therapy.)