My So-Called Truth: William James and the Will to Believe 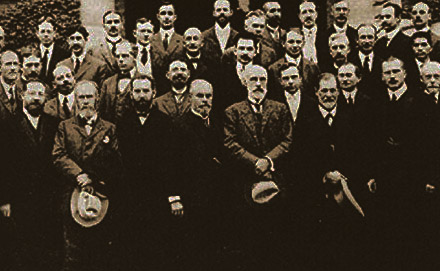 My William James revery continues. It’s easy to like this American philosopher, and it’s fascinating to learn about the other great intellects he interacted with: Ralph Waldo Emerson was his godfather, Henry James was his sibling rival, Gertrude Stein and W. E. B. DuBois were among his students at Harvard. He was a medical doctor and a superb writer as well as a career academic. As one of the first Americans to pay serious attention to an emerging European science that called itself “psychology”, he mingled with Sigmund Freud and Carl Jung.

James stood for a number of controversial opinions on issues that are still hotly debated today. His signature theory, Pragmatism, posits that willfulness is the primary ingredient in human belief. It did not puzzle William James that two people can look at the same evidence and arrive at completely separate conclusions, because James believed that a person’s understanding of truth is inexorably bound to that person’s motivation. We are practical above all else, and within the range of all possible belief systems we will always choose the belief system that benefits us the most. This leads to the pragmatist’s definition of truth: truth is that which is useful for us to believe in.

Let’s allow the philosopher speak for himself, though:

“The great assumption of the intellectualists is that truth means essentially an inert static relation. When you’ve got your true idea of anything, there’s an end of the matter. You’re in possession; you know; you have fulfilled your thinking destiny. You are where you ought to be mentally; you have obeyed your categorical imperative; and nothing more need follow on that climax of your rational destiny. Epistemologically you are in stable equilibrium.

Pragmatism, on the other hand, asks its usual question. “Grant an idea or belief to be true,” it says, “what concrete difference will its being true make in anyone’s actual life? How will the truth be realized? What experiences will be different from those which would obtain if the belief were false? What, in short, is the truth’s cash-value in experiential terms?”

This thesis is what I have to defend. The truth of an idea is not a stagnant property inherent in it. Truth happens to an idea. It becomes true, is made true by events.”

“It is quite evident that our obligation to acknowledge truth, so far from being unconditional, is tremendously conditioned. Truth with a big T, and in the singular, claims abstractly to be recognized, of course; but concrete truths in the plural need be recognized only when their recognition is expedient. A truth must always be preferred to a falsehood when both relate to the situation; but when neither does, truth is as little of a duty as falsehood. If you ask me what o’clock it is and I tell you that I live at 95 Irving Street, my answer may indeed be true, but you don’t see why it is my duty to give it. A false address would be as much to the purpose.”

And, just because I love these quotes and can’t stop clipping them, here’s one more …

Believe truth! Shun error!-these, we see, are two materially different laws; and by choosing between them we may end by coloring differently our whole intellectual life. We may regard the chase for truth as paramount, and the avoidance of error as secondary; or we may, on the other hand, treat the avoidance of error as more imperative, and let truth take its chance. Clifford, in the instructive passage which I have quoted, exhorts us to the latter course. Believe nothing, he tells us, keep your mind in suspense forever, rather than by closing it on insufficient evidence incur the awful risk of believing lies. You, on the other hand, may think that the risk of being in error is a very small matter when compared with the blessings of real knowledge, and be ready to be duped many times in your investigation rather than postpone indefinitely the chance of guessing true. I myself find it impossible to go with Clifford. We must remember that these feelings of our duty about either truth or error are in any case only expressions of our passional life. Biologically considered, our minds are as ready to grind out falsehood as veracity, and he who says, ” Better go without belief forever than believe a lie!” merely shows his own preponderant private horror of becoming a dupe. He may be critical of many of his desires and fears, but this fear he slavishly obeys. He cannot imagine any one questioning its binding force. For my own part, I have also a horror of being duped; but I can believe that worse things than being duped may happen to a man in this world: so Clifford’s exhortation has to my ears a thoroughly fantastic sound. It is like a general informing his soldiers that it is better to keep out of battle forever than to risk a single wound. Not so are victories either over enemies or over nature gained. Our errors are surely not such awfully solemn things. In a world where we are so certain to incur them in spite of all our caution, a certain lightness of heart seems healthier than this excessive nervousness on their behalf. At any rate, it seems the fittest thing for the empiricist philosopher.

A pragmatist turns his back resolutely and once for all upon a lot of inveterate habits dear to professional philosophers. He turns away from abstraction and insufficiency, from verbal solutions, from bad a priori reasons, from fixed principles, closed systems, and pretended absolutes and origins. He turns towards concreteness and adequacy, towards facts, towards action and towards power. That means the empiricist temper regnant and the rationalist temper sincerely given up. It means the open air and possibilities of nature, as against dogma, artificiality, and the pretence of finality in truth.”

It’s important to note that William James did not try to frame his theory of pragmatism as a revolutionary idea, but rather as an obvious fact of life that nobody wants to admit. He called one of his books Pragmatism: A New Name for Some Old Ways of Thinking, and indeed we all know privately (though we may not want to say it out loud) that it is our basic human nature to bend truth so that it fits our wishes and serves our goals. James’ unique contribution to the field of philosophy and epistemology was to spell this out proudly and simply, to admit that his own beliefs were completely willful, and to challenge his fellow thinkers to find any form of belief or opinion that is not subject to the shaping and molding we willful humans place upon it.

William James died in 1910, four years before the start of the first World War. He stood against all forms of smug piety and intellectual bigotry, but unfortunately his theory of pragmatism was no match for the violent belief-crazed excesses of the century that followed. These days, we need his brand of honesty more than ever.

Here’s a decent jumping-off point if you’d like to learn more about William James. I’ve also got at least one more article to write about his stance on the question of free will, and then I’d like to explore an interesting question: how did it affect novelist Henry James to grow up with this guy as an older brother? Stay tuned for more.