Hymn to the Rebel Cafe 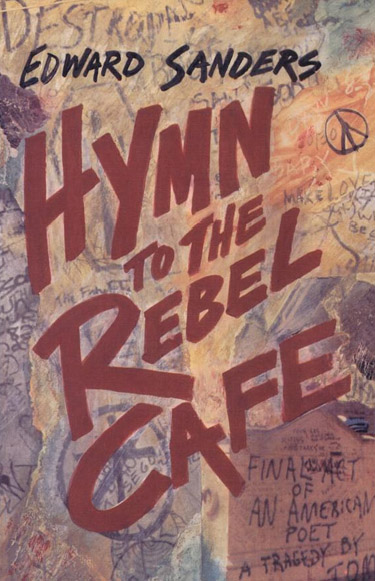 ‘Hymn to the Rebel Cafe’ is Ed Sanders‘ first book with Black Sparrow Press – publisher of Bukowski, Fante, Fielding Dawson, Wanda Coleman – and his first major book of poetry since ‘Thirsting for Peace in a Raging Century’ which won an American Book Award in 1988. I once heard Sanders perform the title poem. I say perform because he doesn’t just read, he reads and moves and plays the lyre and sings. With feeling! It was entertaining and inspirational. The whole next day I walked around singing parts I could remember – All Hail to the Rebel Cafe!

Of course it is impossible to capture all that on the printed page, but it’s the next best thing and a good approximation. The line breaks correspond well with breaths and stops. In fact that’s the case throughout this book – the poems are readable and accessible. The way they look and dance on the page shows Sanders’ indebtedness to the Beats — Ferlinghetti and Corso come to mind. In content as well, Sanders’ concern with justice for all, in natural and societal systems, shows why Ann Charters chose to include his work in ‘The Portable Beat Reader’. For all that there is no mistaking Sanders’ poetry; his style and point of view are unique, marked by his wit and his penchant for going deep into the past to draw parallels with the present.

Another Sanders penchant is a playful approach to typography, a taste in which Black Sparrow has indulged him. The poem “Ocean Etude,” about a visit to the Paris graves of Frederic Chopin, Jim Morrison and Guillaume Apollinaire, gives free reign to this urge. Other poems are pithy nature ditties about the Sanders family and their everyday life in rural New York. For instance: “The wind/struck/the azalea flower/and the black-winged butterfly/licking nectar/clung flutteringly thereon/as the bow dipped down.” Or: “The shiny white-gray blobs/on the pants leg/from the candles/we held/at the Nagasaki vigil/on the Woodstock Green.” There are three sections of these under the titles, “Some Poems from Mead’s Mountain Road,” “At Century’s End,” and “Images of Miriam.”

There are two long poems that require more effort on the part of the reader. But perseverance pays for those willing to follow the author into the arcana of his researches. In places he uses Latin, Greek, Chinese, pictographs and Linear B(?), yet somehow makes it enjoyable interesting instead of T.S. Eliot elitist obscure. “Cassandra” (cf. Meredith, Jeffers) opens with young Cassandra in the Temple of Athena Pronoia in Troy – “She was slender with wide wild eyes/and she leaned to the lusty” – Cassandra, who after she is beaten and raped by Ajax chants a poem within the poem with the haunting refrain: “Minyrismos minyrismos/they always blame the victim.” Bring along your dictionary of classical mythology for this one. “An East Village Hippie in King Arthur’s Court” is a narrative poem that escaped from Sanders’ ‘Tales of Beatnik Glory‘, the story, among other things, of how “Far fucking out!” became a favored expression among the knights of the Round Table. Sanders’ approach here owes something to Lord Buckley – My man was in Camelot, and he was hip. After pole vaultings, boing boings and other perilous adventures the hero realizes that the year 567 is not so different from 1967.

Here is what Sanders does better than almost anyone: He sees all the bullshit going down, all the poverty and pollution, loss of dignity, loss of topsoil caused by the greedheads who run the great American machine. And, like so many dedicated activists everywhere, he opposes the ongoing idiocy for all he’s worth. But . . . he transcends the grimness and makes it fun. He makes it into art. As he says in the poem “For the Waterworkers” — “it should always be a sweet, sweet day/part work, part play.” In the warmth of the Rebel Cafe one can see the truth and not turn away from it, and be actively angry and indignant. But there is always much room to dance, to sing, to make love, be lighthearted and laugh.