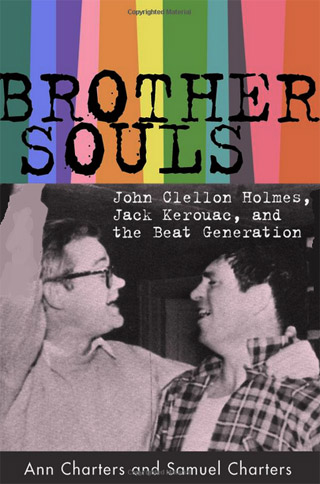 It’s almost 2011, and the Beat Generation is as hot a topic as ever. Especially when it comes to new movies. Here’s the rundown:

1. Way back in 1952, long before Howl, long before On The Road, the phrase “Beat Generation” appeared for the first time in a New York Times Magazine Article by an up-and-coming New York City writer, John Clellon Holmes. Holmes, a good friend of Jack Kerouac and Allen Ginsberg and a founding member of the original Beat circle in New York City, also wrote several novels that were respectably reviewed. But he lacked the charisma and theatricality of the later Beat writers, and struggled for literary success even as his friends reached explosive levels of fame.

It’s only because of these legendary friends, and not because of his own fiction, that John Clellon Holmes merits an extensive literary biography by Ann and Samuel Charters today. Brother-Souls: John Clellon Holmes, Jack Kerouac and the Beat Generation is unusual among literary biographies because its hero never had a breakout success. Instead, he filled out his career with dead end manuscripts, odd magazine assignments and college teaching jobs. In this sense, Brother-Souls is actually a more accurate glimpse of how most writers live than any typical biography of a famous writer. Still, mostly due to Ann and Sam Charters’ obvious affection for their subject (who was their close friend), a poignant and meaningful storyline emerges. The most surprising chapters take place during the 1960s, when Holmes and his wife Shirley attempt to find their own inroads into the swinging counterculture by experimenting earnestly (and at a very intellectual level) with free love and group sex. These experiments failed more often than not, sometimes leaving deep psychic wounds behind, and the chronicles of these failures (which Holmes himself later tried to publish a book about) provide a new angle — an Updikeean angle, surprisingly enough — on the famous legend of the Beats. Brother-Souls, though clearly a labor of love by the Charters team, is a nice addition to their body of work (Ann Charters wrote the first biography of Jack Kerouac, many decades ago).

2. Meanwhile, On The Bro’d is On The Road translated into “Bro speak”:

Then as we were chilling at another crossroads and it was starting to get cloudy another legit cowboy, this one six feet tall and old as hell in a less-than-bigass hat, hollered at us and wanted to know if either one of us could drive. Natch Eddie could drive, and dude had only one DUI while I had two. Cowboy had two cars with him that he was driving back to Montana. Dude’s wife was at Grand Island, and he wanted us to drive one of the cars there, where she’d take over. At that point, dude would be going north, and that would be the limit of our ride with him. But it was a solid hundred miles into Nebraska, and natch we jumped for it. Eddie drove alone, the cowboy and me following, and no sooner were we out of town than Eddie started to beast it like hell at like ninety miles an hour like a straight-up psycho. “WTF is that asshat doing?” the oldass cowboy shouted and beasted it after him. It began to be like The Fast And The Furious: Tokyo Drift.

Yeah. I don’t know either.

3. Speaking of On The Road, San Francisco’s Beat Museum has a report on the progress of the movie currently in production, including photos of John Allen Cassady’s visit to the set. And I still haven’t seen any trace of One Fast Move Or I’m Gone, the film based on Kerouac’s Big Sur with music by Jay Farrar and Benjamin Gibbard. Must have blown pretty quickly through the movie theaters.

4. I also haven’t had a chance yet to see William S. Burroughs: A Man Within, directed by Yony Leyser, but I hear very good things about it. Looking forward to this one. More on the movie here.

5. I did get to see the new film of Howl, and I’ve been wondering why one character, Shig Murao, was left out of the otherwise accurate censorship trial scenes. Here’s a little more about Shig Murao.

6. From Issa’s Untidy Hut: James Wright Trashes Allen Ginsberg. Neither the first nor the last to do so.

7. Ferlinghetti in Guernica (not the town, the magazine).

8. Gus Van Sant is filming Tom Wolfe’s The Electric Kool-Aid Acid Test, the story of Ken Kesey’s Merry Pranksters. I have to say that, so far, I’m not loving the way this project looks. I didn’t think Gus Van Sant did a very good job with the Tom Robbins novel Even Cowgirls Get the Blues, and I fear the new film will be a similarly frenetic, overblown treatment of an important book. I hope the creative team will rein in their actors, stick close to the source material, and let the great story speak for itself. But I doubt they will. So, yeah. Not too psyched.

9. And there’s yet another movie heading our way, about good-humored hippie hipster Wavy Gravy, a real-life character I’ve always liked a lot, and it’s called Saint Misbehavin’. I have bigger hopes for this film than some of the others mentioned above. And I think there are enough Beat-related movies coming our way now, so maybe everybody ought to stop coming up with new ones for a while, till we see how this batch turns out.