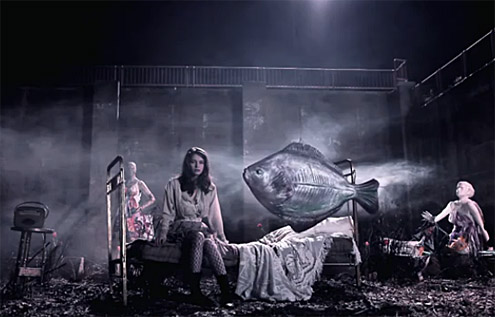 (I especially appreciate Romanian-born contributor Claudia Moscovici’s articles because they fill us in on literary/art scenes we’ll never otherwise hear of. Here she introduces Barna Nemethi, a current sensation in Eastern Europe. — Levi)

Newton’s third law of physics says for every action there’s an equal and opposite reaction. However, things don’t work out as neatly in the world of art. There are some rules that govern the world of art, but these are constantly broken by new and innovative artists. One of the most creative and irreverent art movements was Dada, founded by a Romanian poet, Tristan Tzara. Like Surrealism, which later sprung from it, Dada was a broad cultural movement, involving the visual arts, poetry, literature, theater, graphic design and–inevitably–even politics.

Born in the wake of the devastation caused by the First World War, Dada rejected “reason” and “logic,” which many of its artists associated with capitalist ideology and the war machine. Despite becoming internationally known for so many visible artists and poets, the Dada movement could not be pinned down. Its aesthetic philosophy was anti-aesthetic; its artistic contribution was anti-art. As Hugo Ball stated, “For us, art is not an end in itself … but it is an opportunity for the true perception and criticism of the times we live in.”

For every action there’s an equal and opposite reaction? Even in the anti-rationalist world of art? Maybe so. But what actions might we be speaking of, today? It’s hard to pick and choose among the many dangers facing the contemporary world: the ever-present threat of terrorism; the backlash of democratic superpowers sometimes even against the innocent and the helpless; the plutocratic mentality threatening to engulf the free world; the homogenizing reign of pop culture; the standardization and what Marx would call the “object fetishism” that has reached unimaginable proportions in the globalized capitalist market.

Looking at the world through critical eyes can reveal a discouraging picture. But maybe we need such so-called “nihilist” reactions from artists to avoid the bland conformity which threatens to normalize even phenomena which should, by all rights, shock us. Few would know about these modern phenomena better than Barna Nemethi, a young Romanian artist who grew up in a new capitalist market that developed rapidly under his eyes, largely due to the efforts of his own generation.

By chance (or good fortune), Barna also grew up at the center of Romanian culture. His adoptive father is Grigore Arsene, the President of the Romanian Association of Editors who, along with his wife, Iren, is head of Curtea Veche Publishing, one of Romania’s most prestigious and largest publishing houses. Barna followed in his parents’ footsteps by becoming the Managing Parter at Curtea Veche Publishing and the Executive Manager of the advertising company Griffon and Swans. He’s also a very talented film director and photographer.

But perhaps Barna’s most ambitious, subversive and dynamic project is AllHollow.com, an online magazine that combines photography, journalism, (anti)aesthetic philosophy, fashion, film and art. In the April issue, Laura Cosoi pays tribute to the legendary pop artist Andy Warhol by dressing like him and shooting video clips in which she imagines and recreates how he’d react to contemporary gadgets, such as the iPod.

The clips are quite stylish, but there’s a good measure of irony and humor in the tribute, as Laura emulates Warhol’s slow, meticulous style. The April issue of AllHollow also includes Wonderland (concept by Oana Paunescu, produced by Alina Huza and Patru Paunescu, directed by Vlad Fenesan and photographed by Barna Nemethi). The film and the photo shoot both mediate the boundaries between high fashion (modeled by Iulia Cirstea) and new Surrealism/Dada images and scenes.

The set itself has dream-like inconsistencies and juxtapositions. A spectacularly beautiful woman, dressed in a combination of nightgown/ballerina outfit and black fishnet stockings, lies on a metal bed above which hangs…a giant fish. She’s surrounded by three mannequins, which seem evocative of feminine and masculine roles. The “heroine” moves with the mechanical, slow and sometimes sensual abandon of someone trapped in a dream, or perhaps unwittingly trespassing the boundaries between dream and reality. The images and the model are so hauntingly beautiful that they belong in a high-fashion shoot. Yet, at the same time, the incongruous setting and absurd array of props surrounding the model makes the entire scene evocative, open-ended in meaning and surreal. There is no dominant theme, no obvious plot: nothing to trap the model in any structure other than the aura of the fantastic itself.

I can’t write about AllHollow without also alluding to The Hunt, a series of photographs taken by Barna Nemethi in Manhattan, which features the models Zuzanna Buchwald and Will Vendramini. As in Wonderland, there’s a Surrealist mood and more than a touch of Dada in these images. The handsome man sometimes wears a funny animal mask, and sometimes does not. He’s simultaneously presented as a stalker/predator in search for his languid prey and as an attractive potential date for the beautiful woman.

The Hunt makes light of the strange (yet normalized) mating/dating rituals that men and women commonly engage in. But, simultaneously, like practically all of Barna Nemethi’s series, this set of images could easily function as a high fashion photo spread that seamlessly combines impeccable stylishness and subversive creativity.

For every action there’s an equal and opposite reaction. This happens in the laws of physics and sometimes also in the more erratic world of art. In the case of Barna Nemethi’s innovative AllHollow project, however, the action and the reaction come from the same source. Barna Nemethi’s film and photography represents a new Dadaism full of artistic innovation and subversion at the heart of the marketing world that it simultaneously perpetuates and transforms.